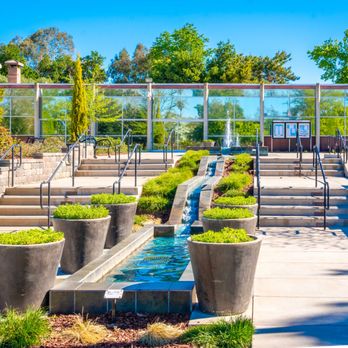 One of the best kept secrets in Rancho Cordova, CA is the dog park at Hagan community park.

In addition to the dog park other facilities include numerous baseball fields, three pools, a scale model railroad, several playgrounds and tot lots and walking and bike access to the American.

The dog park opened in late February 2010 and is actually comprised of three dog parks adjacent to one another. Two of the grassy parks are for large dogs, one is for small dogs.

The middle park is for large dogs and that, I think is the best of three dog parks as it is shady. The other are quite exposed to the sun. In summer we often hit triple digits but the shaded area remains relatively cool.

The park provides water and cleanup bags. Users appear to be very conscientious in cleaning up after their dogs.

There are two parking lots, one is free and one charges $4.00. The free lot is just a short walk from the dog parks. The pay lot has almost direct access to the dog parks.

From the dogs perspective, pulling into the parking lot creates a lot of tail wagging. Once outside she is eager to get going and tries to lead us to the dog park.

She is quivering with excitement at the gates and is impatient to go inside.

Once inside she sniffs and greets other dogs and tries to lead the other dogs on a run – there is plenty of room.

If asked to rate this community dog park I would give it 10 out of 10.. It is well maintained, large, provides water and cleanup bags and free parking. If you own a dog and are in the Rancho Cordova, CA area Tinker and I highly recommend this facility.